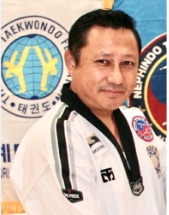 HISTORY OF MY TAEKWONDO JOURNEY

On my young age. I, Thapa Kishan Singh Baral was very active and aggressive with positive manners to learn and do any kinds of activities, sports, martial arts etc. I would like to know more about the subjects. I never give up for learning until now.

On 1978, my mother and father gave me very big surprised to me. They bring me to enroll in taekwondo class. WHO AM I TODAY? Because of their blessings. I would like to give very big Thanks to my mother and father who always motivate, supported, and bring me in this level today. We were five young boys’ friends at that time but until now, I am the only the one successfully and continuously doing taekwondo. I am very lucky and proud of myself; I started to learn Taekwondo since 1978 with my first Korean Grand Master Mr. Jay K. Shin in Hong Kong who was taking care of British Forces Taekwondo Association.

I had a Korean Grand Master Mr. Kwok Jae- Young from 1982, with Grand master Mr. Ramesh Goshai who take over British Forces Taekwondo Association until 1987, and still active in Taekwondo. On 12 April 1983, received my 1stDan and 22 August 1984 received my 2ndDan Certificate. I left Hong Kong on 16 November 1984; I went back to Nepal for good and academic study. I still remember on that moment Grand Master Mr. Ramesh Goshai and Grand Master Mr. Tulsi Gurung , (8th Dan now) in present (during that period November 16, 1984, he was 3rdDan) was rushed to hand over my 2nd Dan certificate at Hong Kong Kai Tak International airport. I achieved most my dreams like to become black belt in Taekwondo and many more achievements. I learned different types of martial arts such as Arnis 2006, Muay Thai 2007, Krav Maga 2007, etc.; I played Football from Nepal National team 1987, received medal from Nepal late Queen and Royal family. That was my big dream that I achieved. It was very difficult to open or teach taekwondo in Nepal during 1984, but I did teaching to my friends and at Buddha Jyoti Secondary English Boarding School Bhairahawa and Jaycees Kindergarten School as sports teacher 1986-89. On 1987, I met my Ex. British Forces Taekwondo friend Mr. Santosh Pradhan. On 1996, I came back Hong Kong with my wife and continuously doing Taekwondo. I met Grand Master Mr. Tulsi Gurung in Hong Kong 2004 after (20 years) since 1984, as Chief President and Founder of Hong Kong Nepalese Taekwondo Association. Grand Master Mr. Tulsi Gurung is member and in charge of senior technical coach at Hong Kong Taekwondo Association. 2005 I was member of Hong Kong Foreigners Taekwondo Association with Grand master Mr. N. J. Gurung. I upgraded me as 3rd dan. On 2009, I completed International instructor course in Kukkiwon Korea. I, myself and Master Dil Gurung, we established Unity Taekwondo Academy in late 2009. On 2012, I hand over Unity Taekwondo Academy to master Dil Gurung. Since 2012, I Established my own Taekwondo do Club as registered in Hong Kong with under name NEPHINDO TAEKWONDO CLUB HONG KONG as Chief President and founder.

NEP is stance for Nepal, PHI is stance for Philippine and INDO is stance for Indonesia. I am teaching Taekwondo base on as traditional Korean Taekwondo as 80’s and modern Taekwondo techniques after affiliated in Olympic Games. As my experience in Taekwondo, there is big difference between old traditional Korean Taekwondo and modern Taekwondo. Mordent Taekwondo is sport Taekwondo. Grand master Mr. Ramesh Goshai; up graded me as fourth and fifth Dan and always assisting me. Off course Grand Master Mr. Tulsi Gurung is very friendly, kindness and helpful in our local Nepalese and Hong Kong Society and communities as well in Taekwondo field. He was with my Father’s regiment in the British Gurkha Army, during in his British Gurkha Army service. We were training together in British Forces Taekwondo Association and currently. Most of the time in Taekwondo events, he always give me a very good chance to lead and share a Knowledge. Time to time get together with all local Nepalese Taekwondo club masters regarding, “How to build the bridge of Taekwondo development”; to keep good relationship with Kukkiwon, Hong Kong Taekwondo Association and with all local club masters in Hong Kong. Which is very important to all of us.