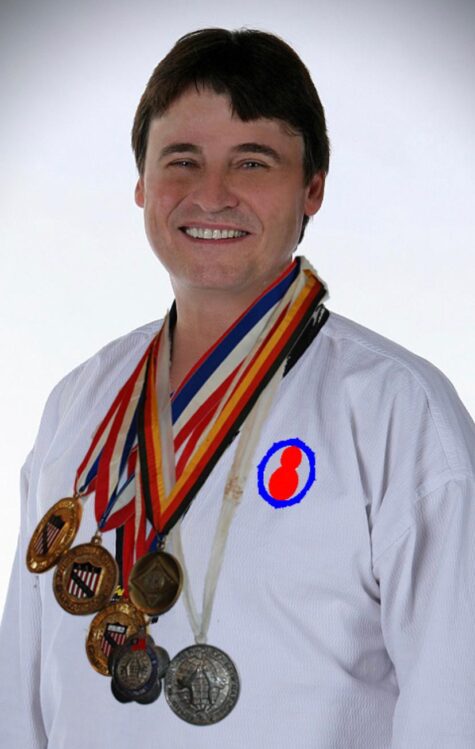 GM Scott Rohr holds a 9th dan in Korea Taekwondo Jidokwan. His first encounter with Taekwondo was in the dojang of Choi, Tae Hong during September of ’73 in Portland Oregon, a lifelong passion was born that day. He trained 16 classes per week. Over the years he was bestowed several honors and won various major events throughout Oregon, Washington and Vancouver Canada including the following:

Scott says: “Taekwondo has brought me dear friendships and opened unique doors. Such a rare opportunity occurred in September of 1988 when I was selected over 65 US candidates to carry the Olympic flame on its relay through South Korea before the opening of the Games”. He also says: “Competition teaches there are times you will be beaten, but in these times you will learn the most about yourself”.

Historical Note: Scott’s mother was a clothier and tailor and worked in a well known men’s clothing store in Chicago in the 30’s. A few months before an American Athlete participated the 1936 Berlin Olympics the athlete bought suits there and my mother personally tailored him along with a male coworker. That was a few months before male would become world famous after winning golds in Germany. Ironically in Scott’s photo gallery below Scott appears in the same magazine page as the male who won golds at that Olympics. That man who met Scott’s mother was the legendary Jessie Owens.