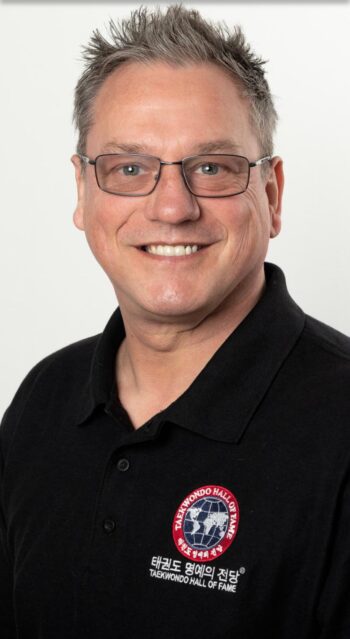 Master Paul Timms from Great Britain has trained in WT Taekwondo for over 35 years. Achieving his black belt in Berlin in 1992 under no less than four Korean Masters whilst serving overseas as a Royal Military Policeman.

It was whilst serving in the Military that he went on to achieve his greatest success in Kyorugi representing the British Army.

He runs a very successful Taekwondo Academy in rural Lincolnshire in the UK and is very well known to anyone practicing Taekwondo in the UK.

Paul is now a World Class International Referee and has refereed at the very highest level of World Taekwondo events, including The World Championships, The Grand Prix and Grand Slam finals and as we go to print is hoping to be selected to referee at the upcoming Tokyo Olympics.

He was one of the Olympic Torchbearers for London 2012 and was in charge of internal security for the London Olympic Taekwondo event at the Excel arena.

Master Timms was honoured at the Hall of Fame Ceremony in Bangkok, Thailand in August of 2019.