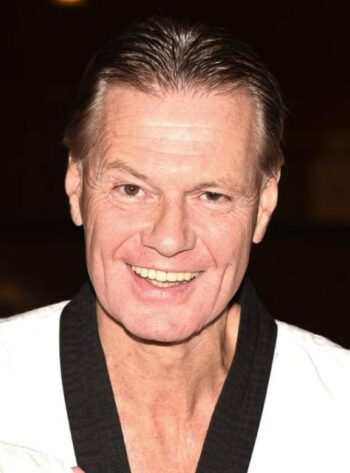 He has 3 sisters 2 older and 1 younger. His father was disabled he had the disease MS. He grew up in a poor family. His mother had to earn the living for 4 children and a sick man. There was no money for sports that’s how he grew up in the neighborhood.

In 1971 at the age of 15 years he started with karate in a community centre the lessons were free and he was inspired by the films of Bruce Lee. After six months he came in contact with Taekwondo at the school from Aad van der Luit . It was the ITF style but he was immediately impressed by the kicking techniques. Aad van der Luit was his sports father until he passed away in 2017.

He started with taekwondo competition and put all the trainings time into it. After a few years they switched from the ITF to the WTF Taekwondo style. He started his own Taekwondo school in 1976.

As a competition player he achieved the following:

For the Dutch Taekwondo organization TBN he still does for 35 years board functions.

Member of the higher dan college of the Dutch Taekwondo organization TBN.
Has produced/trained as a trainer in his taekwondo school over more than 185 black belts

Trainer of numerous champions and most proud of Most proud of:
Mandy de Jongh who became 2 times European champion 1986 in Seefeld Austria and 1988 in Ankara Turkey and is the first Dutch female who has become world champion in 1987 in Barcelona Spain and also won a silver medal at the Olympic games 1988 in Seoul Korea.

Another champion of his is Sonja Pool who became European champion in 1980 Esjberg Denmark and took 3rd place at the world championships in 1983 in Kopenhagen Denmark.

He is currently preparing to take his 9th dan test Kukkiwon, Seoul. Korea in 2022 9th dan in 2022 test to be held at Kukkiwon in June 2022 Kukkiwon Seoul Korea,