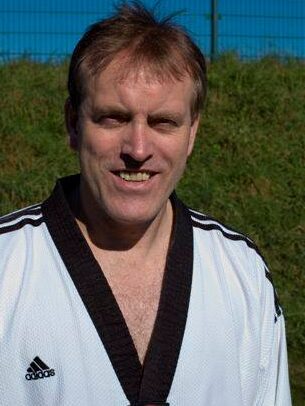 Henk Meijer, one of the greatest players in the history of the Netherlands was inducted into the OFFICIAL TAEKWONDO HALL OF FAME® in 2013.

Early Life
Meijer was born on 22 July 1959 in Winschoten, Netherlands. He is the fifth out of six children born in his family (he has two brothers and three sisters), and his parents divorced when he was just three years old. His mother took responsibility for raising him. Meijer trained in judo from the ages of 7 to 11, and achieved brown belt rank in that art.[1] From the ages of 11 to 15, he played football. He then trained briefly in Shotokan karate at age of 14 before beginning to practise taekwondo couple of years later. At the time, the only style of taekwondo available in his home region was the International Taekwon-Do Federation (ITF) style.

Meijer began training in ITF taekwondo under Jan Suiveer, and later continued under Wim Bos, one of Suiveer’s students. In 1981, he began training in the World Taekwondo Federation (WTF) style of taekwondo.[1] The main reason he moved from the ITF to the WTF was because the latter organisation had gained Olympic recognition.[2] He also expressed dissatisfaction with the poor standard of organisation of ITF competition in the Netherlands at the time

Competitive Taekwondo Over
For a few years in the early 1980s, Meijer competed in both ITF and WTF competitions.[2] He was listed at 191 cm (6′ 3″) in height and 105 kg (232 lb.) in weight.[3] In WTF competition in1982, he became European Heavyweight Champion, and won both the Dutch National Championships and the Dutch Open Championships. That same year, he trained under Hee Il Cho in Los Angeles for a month.[2] The following year, he competed in the WTF’s World Taekwondo Championships in Copenhagen and took third place in his division. He also took charge of the taekwondo school he had been training at from his instructor, Bos. In 1984, he took third place in the men’s heavyweight division at the ITF World Championships in Glasgow.

In early September 1985, Meijer competed in the WTF’s World Taekwondo Championships in Seoul, South Korea, and won the men’s heavyweight (+83 kg) title, becoming the first non-Korean to win a world title in South Korea. In 1988, he took bronze at the European Championships in Ankara and at the World Cup in Helsinki. That same year, he competed at the 1988 Summer Olympics in Seoul, where taekwondo made its first Olympic Games appearance as a demonstration sport; this was the last time he participated as a competitor Meijer later wrote, “Although I lost my 2nd fight against my big opponent and good friend Michael Arndt from Germany, it was a beautiful finish of my career as a competitor.” By the end of his competitive taekwondo career, he had won five Dutch National Championships and five Dutch Open Championships.