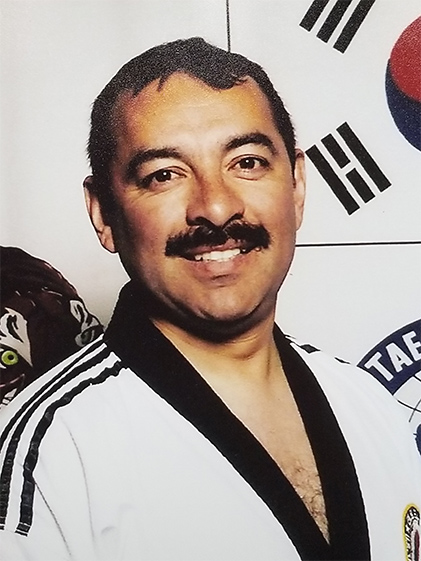 At the age of 7, Grandmaster Michael Vasquez seeked out martial arts due to being bullied. He was able ot train with his father and his siter a the YMCA in town. He started his training under Master Don Betts and shortly started traveling to Trenton, Michigan to train under Chung Do Kwan instructor Grandmaster Edward Sell. In 1971 his family found the instruction of grandmaster Ho Yung Chung and soon made that their home school base. His family traveled all over Canada, Michigan, Ohio and Indiana for open tournaments. He placed in all of them. In 1975 Grandmaster H.Y. Chung and him traveled to Korea. There he spent two and a half weeks trainng at other Ji Do Kwan schools while Grandmaster H.Y. Chung visited family. Grandmaster M. Vasque quotes “That is where I learned the true art and discipline of Taekwondo”. The training was so much more intense and captivating that it made him want to follow the art and train even harder when he got home. In 1976 he made the US National team. He spent 4 years as a team member and team captain for one of those years. Grandmaster M. Vasquez has also done some training in Hapkido, Jiu-Jitsu, Arnis and Wrestling. He continues to instill into others the training he has received through the years. 1977 US Tae Kwon Do Team Trials – Berkley, CA – Fly – Gold 1977 US Team Member 3rd World Tae Kwon Do Championships – Chicago, IL 1977 Presented Special \Award by National AAU Tae Kwon Do Committee 1978 US Team Trials – Washington, D.C. Fly – Gold 1978 Pre-World Tae Kwon Do Games – Seoul, Korea – Bronze 1979 Tae Kwon Do Team Trials – Dayton, Ohio – Fly – Gold 1979 US Team Member World Championships – Stuttgart, Germany 1979 US Team Member North American Games – Honolulu, Hawaii – Silver 1979 US Team Member World Games – Taipei, Taiwan 1980 US Tae Kwon Do Team Trials – Berkley, CA. – Fly – Gold 1980 1st International Goodwill Meet – Silver 1980 Selected Team Captain for International Goodwill Meet 1980 US Team Member Pan Am Games – Houston, TX. – Gold 1983 2nd Division Championship – Camp Casey, Korea – Gold 1983 14th Annual Foreigners and Women’s Tae Kwon Do Championships Kukkiwon – Seoul, Korea – Gold – Mike Vasquez becomes the first USA male to win a gold medal in an international competition held in the Kukkiwon. 1993 Inducted to Port Huron Sports Hall of Fame 2009 Inducted Into the Taekwondo Hall of Fame April 10th, 2009 2009 Inducted to Taekwondo Hall of Fame 2013 Inducted to US Grandmasters Society Hall of Fame 2013 Discipleship Award by US Grandmasters Society Hall of Fame