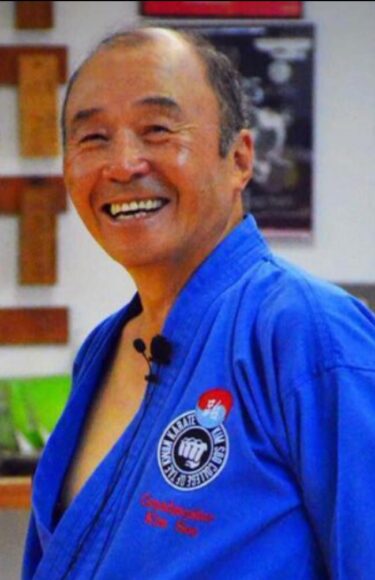 Kim was born in Seoul in 1939, and attended the Hankuk University of Foreign Studies (HUFS) where he received a B.A. in Russian language and literature. He began studying gwonbeop Kong Soo Do at an early age under the guidance of Nam Sok Lee, president of the Chang Moo Kwan Association in Seoul. In November 1994, Kim was promoted to 10th degree black belt by his Senior Grandmaster, Hong Jong-Pyo, Taekwon Kwon Bop, in the Central YMCA, Seoul, establishing Kim as one of the highest ranking karate instructors in the world.

During years of practice and teaching, Kim has taught many students, including the bodyguards of the late South Korean president, Syngman Rhee, U.S. Army units in South Korea, municipal police departments, youth organizations and students at universities in South Korea and Texas.

Kim arrived in the United States in January 1968 and has maintained a central school in Houston, Texas since September of that year. In September 1970, he inaugurated his martial arts system entitled Chayon-ryu (Natural Way). Kim is fluent in Korean, English, Spanish and Russian; in addition, he understands and writes Chinese. Kim plans on continuing to teach and to place emphasis on the spiritual as much as the physical aspect of martial arts.

In the 1950’s, Park Chul-hee mentioned to Kim he thought their missing master, Yoon Byung-in, may be teaching in Russia. This inspired Kim to study Russian language and literature in college in hope of traveling to Russia to find Yoon Byung-in. Since that time, Kim has continued to preserve the chuan-fa curriculum from Yoon Byung-in, plus searched for Yoon. His research took Kim all over the world including Japan, then Russia (Omsk and St. Petersburg) in 1994. Kim was finally able to make contact with Yoon’s family in South Korea, who were able to verify Yoon’s chuan-fa training and life. Kim maintains a relationship with the family to this day. (source Wikipedia)