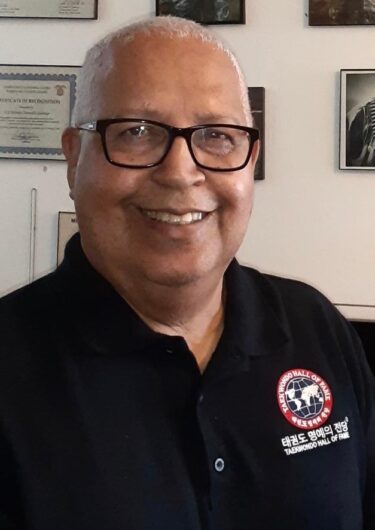 GM Aristides Montalvo Santiago was born in 1953, started Taekwondo at end of 1962 in the south Bronx New York at the age of 7-year-old with a Korean veteran soldier who comes to USA after Korean War ended.. At the end of 1967 he continued practice with Master Carlos Farrell, a student from Master Sihak Henry Cho where he received his green belt, in 1969 he moved to Puerto Rico and join to one of the representatives from Master Cho (Mr. Ortiz). He received his black belt with Master Henry Cho. In 1974. He joined the USA army as contractor for humanitarian refugee in LAOS under the supervision of LTC. Ko Jae Chun who introduced him to the ChungDoKwan style. . LTC. Chun Was member of the Korean blue dragon forces. On January 1979 I he joined Chung Do kwan under the Guinness of UHM WOON KYU (RIP) and PARK HAE MAN until now. Currently, he is the director of the Taekwondo national program of the government of Puerto Rico, and professor of physical education at the National Catholic University. He currently an Kukkiwon 8th Dan and Chung Do Kwan 9th Dan. On August 25, 2011 GM Aristides Montalvo Santiago was honored at the Kukkiwon World Taekwondo Headquarters in Seoul, Korea for having introduced Olympic style sparring to Puerto Rico.