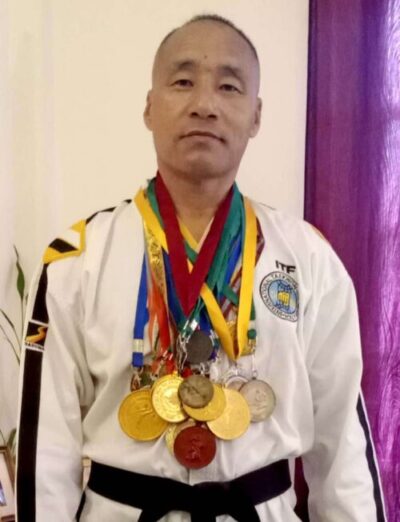 Master Israel G. Xuivi a member of the Sumi Naga Tribe in India is one of the most accomplished Taekwon-do athletes in his country. He is also the founder of the style he calls. Naga Kiti-do “The way of kicking”. In 1995 he was entered into the Limca Book of Records the equivalent of the Guinness Book of Records for “Fast kicking” and is the 4 time record holder. As an athlete he represented India five times in the International Taekwon-Do Championships. twice in the World Taekwndo Championships as well as various kickboxing championships held in Russia, South Korea, Argentina, India and elsewhere. He has won 20 gold medals in national and state level competitions. In the 20th National Tae Kwon Do Championships his team third and was presented with the “Best Disciplinary Award”. In a magazine article named “ATTITUDE” wherein the above information appears Master Xuivi recalls one of the most memorable moments in his competitive career was when he fought his idol three time world champion Paul Germain at the 1997 World Taekwon-Do Championships which were held in Saint Petersburg, Russia. He recalls being evenly matched with Paul Germain and losing to him by only a few points. Master Xuivi further stated that he owes everything related to his success in Taekwon-Do to General Choi Hong Hi.