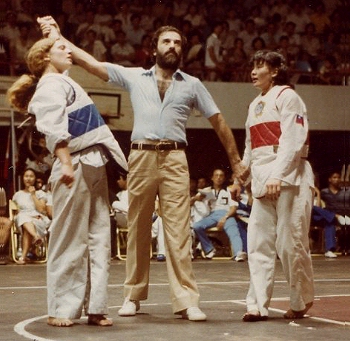 Marcia was undefeated as a TKD competitor, Regionally, Nationally and Internationally. In addition to her 2 successive years of Gold Medal wins in Korea and Taipei, Taiwan China she also won multiple gold medals dominating the sport 1978 -1980 including: 3-time National AAU and NCAA Middleweight Champion and member of the US Women’s Tae Kwon Do Team 1978, 1979, and 1980.

The challenges of women participating in the early years were significant and all women competitors were pioneers and champions in their participation in early international TKD competition.

“I was fortunate enough to live in a time when history intersected positively with my passion.” Title IX was opening up opportunities for women in AAU and NCAA competition and Tae Kwon Do sought growing recognition by these bodies. Title IX sought to eliminate discrimination on the basis of sex in programs and activities at colleges, universities and in sports. In the 1970s the AAU was the only “gateway” for elite athletes to participate in international competition and eventually the Olympics. In the 1970s women were still not “allowed” to participate in many sports competitively.” Historians note that during this time, “the AAU received growing criticism as women were often banned from participating in certain competitions and some athletes were even locked out.”

Without women’s inclusion, Tae Kwon Do as a sport could not grow in AAU or NCAA sanctioned events including the World Games and later the Olympics. Tae Kwon Do’s inclusion of women in International Competition ushered in and sanctioned women’s participation in 1978 Seoul Korea, and going forward.

“We broke the barrier in TKD in 1978 facing many personal and athletic challenges as Women’s Teams participated for the first time at this elite level.” It was not without both controversy and support. Key supporters offering encouragement to me within TKD in the early years were my instructor Master Marty MacKowski and Dr. Ken Minh of the University of California Berkeley. Women sparring partners and friends included Deb Pederson, Dana Hee, and Connie Miller. Teammate sparring partners included Sunny Graff, Ayoka Brown, and Lynette Love. Support for the first women’s team also came from the first Women’s Team Manager, Kyong-ae Fontaine now Dr. Tae Yun Kim.

That first year of women’s competition in Korea showcased the remarkable skill level female competitors had achieved. It was as if years of pent-up training preparation and dedication was unleashed for the world to see. Spectators often commented in wonderment at the “intensity” with which the women’s competition proceeded. Each women’s match was 9 minutes of continuous action, where the men’s matches often played out in more cat and mouse strategies. The men knew from experience the multiple rounds which awaited those who would advance in the competition.

Marcia became involved in martial arts and Tae Kwon Do after becoming a mother at 17. She was first introduced to the arts when she attended college and fell in love with the discipline, art, and competition of Tae Kwon Do. Marcia studied at Macknowski Tae Kwon Do, later Golden State Tae Kwon Do in the San Francisco Bay Area.

Marcia holds a Third-Degree Black Belt in TKD, a Black Belt in Shoto Kan Karate, and has trained in multiple combative arts including wrestling and boxing. Marcia utilized her collective training, fierce competitive spirit, and education to develop and teach comprehensive Self-Defense – Personal Safety Classes for Women and Children of all ages. She has instructed courses at 4 Universities – Colleges including San Jose State University, De Anza College, Umpqua Community College and University of Oregon and throughout communities on the west coast and beyond. Marcia authored a book, Lifelines: Women, Male Violence and Personal Safety, co-developed Military Sexual Trauma Monologues®, and has numerous other professional achievements including receiving her Doctorate in Public Health and her lifelong work in the prevention of violence against women.