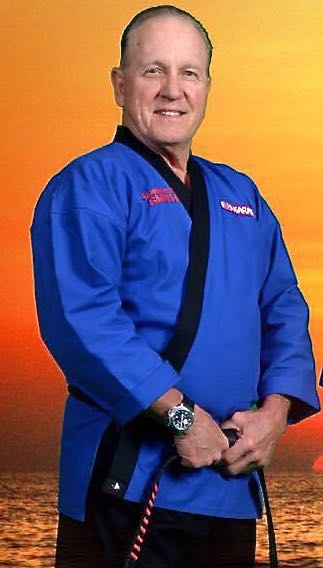 GM Jeff Smith is an American martial arts instructor, best known as the former seven-time PKA World Light Heavy Weight Karate Champion. One of his title defense matches was on the undercard for the Ali vs. Frazier �Thrilla in Manilla.� He currently operates a martial arts school in Virginia where he teaches Tae Kwon Do in which he holds a 10th degree black belt. On April 6, 2007, Smith was inducted into the OFFICIAL TAEKWONDO HALL OF FAME�. On June 15, 2013, Jeff Smith was the first to be presented the Joe Lewis Eternal Warrior Award, along with Bill “Superfoot” Wallace and Chuck Norris at the Battle of Atlanta World Karate Championship. On June 16, 2016, Jeff Smith was promoted to the rank of Grand Master 10th Degree Black Belt by the Professional Karate Commission at the Battle of Atlanta World Karate Championship XLVIII. His promotion was presented by Grand Masters Glenn Keeney, Allen Steen, Pat Johnson and Pat Burleson. On August 4, 2017, Grand Master Jeff Smith was featured on the cover of the Who’s Who in the Martial Arts Legends Edition and in the Lifetime Achievement section. He is the current COO and Director of Instruction for Mile High Karate and Martial Arts Wealth Mastery, a nationally recognized martial arts franchise and consulting company. (source Wiki)